Last November we flew to England to visit my family. The trip from Australia to the UK is tediously long, and especially arduous when you travel economy class, as we do, with very little room to move, snoozing shoulder-to-shoulder with complete strangers.

The last leg of our journey was from Doha, Qatar, a mere 7.5 hours following the 14.5 hour flight from Melbourne to Doha and a quick run from one end of the airport to the other to change planes.

The young man beside me had slept most of the way from Doha, surfacing briefly for a cup of tea somewhere over Budapest before snuggling his head into the blanket he had jammed into a little nest against the window, and falling straight back to sleep.

Suddenly, in the last half hour of our flight, his arms and legs started twitching, looking for all the world as if he were trying to run. While dogs commonly do this when they dream, we humans tend to be more still, no matter what athletic feats we are executing in our dreams. His movements gathered speed and intensity until his left foot lifted high into the air before crashing down at speed onto my toes. Ouch!

His unusually intense movements prompted me to give him a nudge to make sure he wasn’t having a fit.

I gently touched his arm and spoke softly. “Are you ok?”

He blinked, shaking his head, looking around, briefly wondering where he was, before remembering.

“I was having a bad dream,” he began.

He was fully awake by now, so I apologised for waking him up, explaining that I thought I should check in case he was having a fit. To add a measure of humour, I laughingly told him that he had stamped viciously on my foot. “What was happening in your dream?” I asked.

No, I wasn’t going to let him know that I’m a professional dream analyst; my intention was to ease his comfort by making light of the matter.

“I was having a lovely time with my friends in the park,” he said, ‘when suddenly there were bears everywhere. One almost got me, but I stamped on it.”

“I have been thinking about bears recently,” he added, “and it looks like I’m trying to run from something scary. That kind of fits where I am in life right now.”

I relaxed back in my seat.

Over the past few decades, I have seen such a shift in people’s attitudes to their dreams. There seems to be more acceptance that our dreams are meaningful and worthy of sharing. People also seem to be more educated about dreams and dreaming, and more commonly able to recognise a meaningful link between a dream and waking life. My Doha-London sleeping companion delighted me in his acknowledgement that his dream reflected a current fear.

As a dream analyst I wanted to say that stamping on the scary bear was possibly a good start in taking a proactive approach to his fears. ‘No more, enough! Be gone!’ Then I would have added that a better long-term outcome is to get to know the fear and discover what it can teach him about himself, rather than to try to stamp it out and eliminate it. As we all know, when you don’t address a fear – or when you try to stamp it out – it lurks, unresolved, in your unconscious, and will rear its bearlike head and paws again sometime soon. Life works best if we face our fears, get to know them, learn from them, and negotiate a more peaceful way forward.

I did discover a little more, as we chatted. He was returning to London after attending a conference in Bangkok, and no doubt his dreaming mind had plenty to process about his experiences within the conference and in Thailand itself. He made good use of his flying time.

So why did his arms and legs move about while he slept, and why was he able to bring his foot down with sufficient force to stamp on me, thankfully without injury?

During REM (Rapid Eye Movement) sleep, our voluntary muscles – with the exception of our eye muscles – are paralysed to protect us (and those nearby!) from acting out our dreams. This is sleep paralysis. Although the young man sitting next to me on the plane was not fully acting out his dream, his muscles were not as fully paralysed as is usually the case. He may have been dreaming during a NON-REM phase, or he may, as sometimes happens, have lost some of the sleep paralysis protection. Most likely though, the scary nature of his dream was partially waking him up, leaving him in a kind of twilight zone, partially dreaming, partially awake. Caught in this zone, some people lose the muscle paralysis, while others can find themselves awake and unable to move because the muscle paralysis is taking more time to release.

From our general chat as we descended into Heathrow, I learned that the young man was unaware of any personal history of moving in his sleep. If you – or someone you know – regularly has a similar experience, you might want to book in with a sleep consultant who can observe your sleep, do some tests, and offer a diagnosis and practical help.

Long haul flights may be tedious and unadventurous, but both my sleeping stranger and I disembarked with a funny story to tell. Who knows, he may even read this blog one day. And that would surely add a twist to his tale! 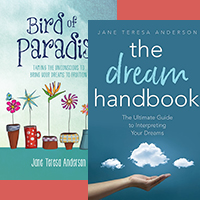 Graduating with an Honours degree in Zoology specialising in developmental neurobiology from the University of Glasgow, dream analyst and dream therapist Jane Teresa Anderson has been researching dreams since 1992, and developing and teaching dream alchemy practices that shift perspective and reprogram unconscious limiting beliefs. Jane Teresa is a multi-published author (her latest book is BIRD OF PARADISE), and appears frequently in the media on television, radio, and in print. She is also host of the long-running podcast, 'The Dream Show with Jane Teresa Anderson', and offers her online study and certificate courses through The Dream Academy.